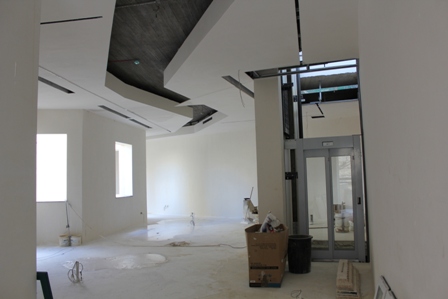 The ERDF-supported Museum was originally planned to open late in 2012.  This ambitious aim has not been achieved.  But progress has been substantial and various obstacles overcome.  Works continued even over the festive period, thus recouping some delays in a couple of trades.  And the added weeks have also resulted in ameliorations in certain aspects!

On Saturday 12 and Sunday 13 January, Chris Walker from our contracted designersBrightWhite visited us to check in detail – even minutely – the quality of work.  For some time he was accompanied by an engineer from Electrosonics, the British specialists awarded the audiovisual hardware contract, and the representative of the foreign company which is manufacturing the showcases.

Other contractors, professionals and FBV volunteers (whether forming part of committees or not) had numerous sessions with Mr Walker, both to clear up the final uncertainties and to finalise the exhibit displaying.  These hours were most useful!

Since it is now confirmed that ongoing works satisfy completely required specifications, we immediately began preparing the artefacts to be installed or hung.  This will necessarily be quite a slow process but will be terminated by the time the showcases arrive at the end of January.  Work will also be undertaken in parallel on the central “spine” feature.

All this will ensure that the targeted inauguration date is hit spot-on, details of which will soon be announced.

You are all invited to ensure that you do not lose this opportunity to acquire a “share” in this project.  The simplest way to be able to feel proud of this “honour” is to become a Fondazzjoni Belt Victoria life member by paying €150 in the Turn €150 into 1000scheme.  Membership offers numerous advantages, including free entrance to this state-of-the-art Centre.