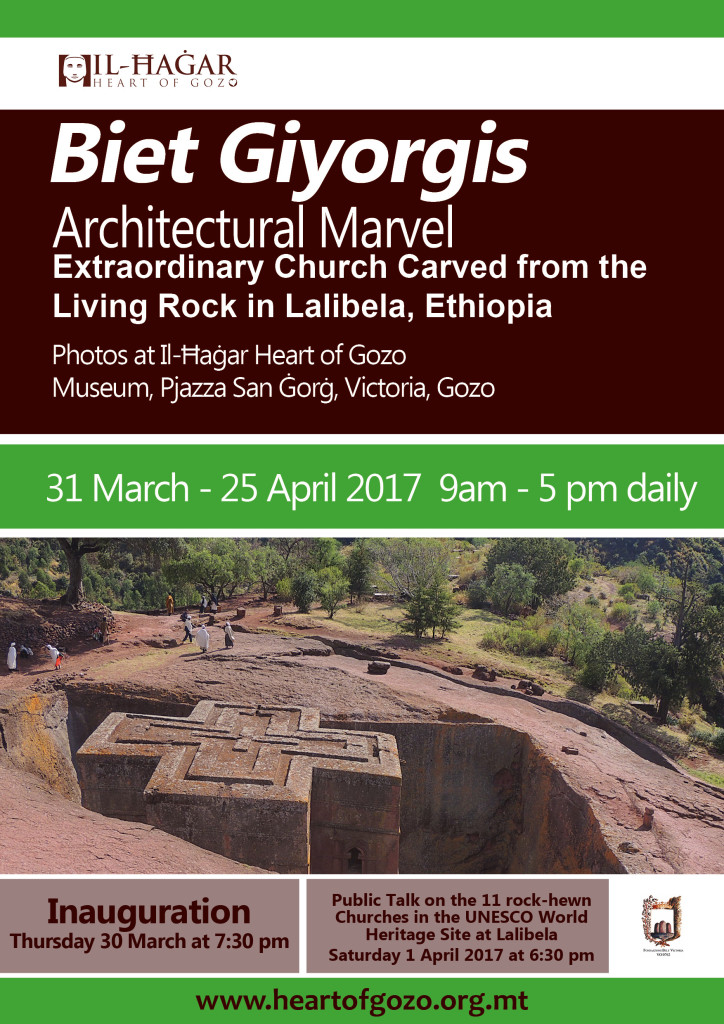 Opening of exhibition of unusual photos of the Lalibela architectural marvel by George Bruce Levine on Thursday 30 Mar @ 7.30pm at IL-ĦAĠAR. It will remain open (9am-5pm, seven days a week) till  25 April; there is no entrance fee.

Mr Levine will also be giving a lecture on Saturday 1 April at 6.30pm.

Situated in the rugged highlands of Ethiopia, in a place called Lalibela, is a group of churches carved out of the hillside by Ethiopian Christians. These unique carvings date from the late 12th and early 13th centuries.

There are eleven churches – or shrines – in the precinct, including two groups of five each; Biet Giyorgis (= House of [Saint] George) stands apart from the others. These churches are in a variety of architectural styles ranging from hypogenic ‘caves’ to replicas of built-up structures found elsewhere in Ethiopia. What they have in common, and which makes them unique, is the method of construction. They were not built by placing one stone upon another in the usual manner; instead they were carved ‘in situ’ from the natural rock hillside. While these churches are obviously the work of man, they nonetheless remain part and parcel of the Ethiopian landscape.

The most recent is Biet Giyorgis. Standing alone in the pit from which it was excavated, it is the most refined of the temples, a testament to careful planning, sophisticated engineering and exact measurement. It is a proud symbol of the Christians’ reverence for the Patron Saint of all of Ethiopia – Saint George.

UNESCO has recognized the rock-hewn churches of Lalibela as a World Heritage Site, and has undertaken their restoration and protection. But in spite of their popularity as a destination for local and foreign tourists, these churches remain an important destination for pilgrims from across Ethiopia and neighbouring countries where the Orthodox Tewahedo Church ministers to the spiritual needs of the people.