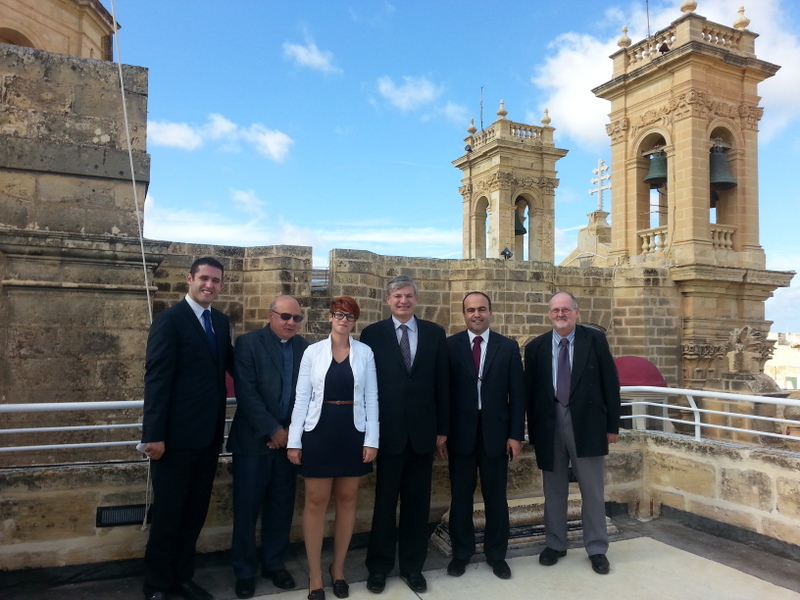 Dr Tonio Borg, the EU Commissioner for Health,  paid an official visit to Il-Ħaġar | Heart of Gozo Museum, at Victoria, on Saturday, 9 November 2013.

The Maltese Commissioner was welcomed to the Museum by curator Mgr Joseph Farrugia. He then met project leader Mr Antoine Vassallo, other members of the Fondazzjoni Belt Victoria, the museum administrator Ms Marilyn Axiak and staff.

Dr Borg, who spent the day in Gozo visiting projects that have received EU funds, had travelled from Brussels to engage in a Citizens’ Dialogue on the future of Europe with European Parliament candidates, representatives from NGOs and local councils and students. The dialogue continued during the visit.

Commissioner Borg, who was accompanied by his assistant Mr Joseph Scerri, visited all parts of the museum and cultural centre, including its panoramic roofs, and expressed very keen interest not only in various exhibits but also in the building itself and its modern and beautiful interior design.

He had special praise for the work that volunteers, especially young people, have put into the project. over the 28 months that it took to realize.

The visit of Commissioner Borg at Il-Ħaġar was followed by a coffee on the picturesque Saint George’s Square where the museum is located.