Heart of Gozo opens up for all 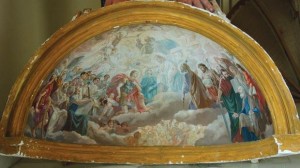 Gozo will soon boast a new museum and cultural centre which will display a rich collection of historical and artistic artefacts previously inaccessible to the public.

Built by the Fondazzjoni Belt Victoria in collaboration with St George’s Basilica, the museum, which will be inaugurated later this month, is the first local museum that has been purpose-built.

The complex, named Heart of Gozo – Il-Ħaġar, represents the realisation of a dream that started in 1998 with the establishment of Fondazzjoni Belt Victoria to promote Gozo’s cultural identity, foundation chairman Antoine Vassallo said.
In particular, it created a cultural destination to promote its historical legacy.

The project aims to revive and promote Il-Ħaġar, the medieval town of Gozo With an investment of €1.2 million, 85 per cent of which is EU-funded, the museum, which is adjacent to the Basilica, is an innovative element that helps in the branding of Malta and Gozo as cultural destinations of excellence, Mr Vassallo said. For years the foundation has actively published books and engravings, hosted art exhibitions, book sales and music recitals.

“The project aims to revive and promote Il-Ħaġar, the medieval town of Gozo, through the development of a cultural and heritage centre to exhibit its rich historical patrimony, with space for cultural expression,” it said.

Several items have been purposely restored to be included in the collection, including a 17th century painting of St Cajetan by an unknown artist, 18th century works the Holy Trinity by Enrico Regnaud and The Virgin of Light by Gio Nicola Buhagiar, and three sculptures – a Risen Christ by an unknown artist, the Veronica attributed to Saverio Laferla and an Ecce Homo by Carlo Darmanin. One of the more important exhibits in this museum will be the former 18th century main altar at St George’s Basilica, designed by Francesco Zahra and created by the renowned Durante family and restored very recently through an eco-Gozo scheme.
A weekend of events is planned to celebrate the project’s inauguration, which begins on February 22 with a commemoration in honour of Gian Pietro Francesco Agius de Soldanis in St George’s Square.

The following morning Prime Minister Lawrence Gonzi will inaugurate the museum and in the evening, St George’s Basilica will host a concert by the Cappella Sistina Choir.