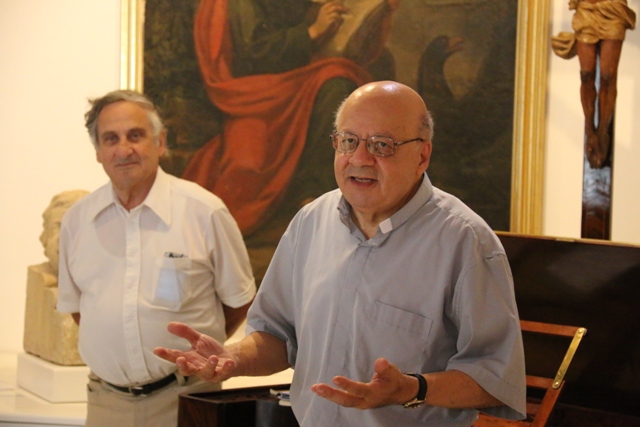 On Saturday 25 June 2016, the Victoria International Arts Festival presented an unusual event in that it inaugurated a reconditioned square piano lately donated by VIAF Artistic Director, Joseph Vella, to the state-of-the-art Il-Ħaġar – Heart of Gozo Museum, right across from St George’s Basilica in Victoria.

After a warm greeting extended by Museum Curator Mgr Joseph Farrugia to the patrons that packed the main third-level hall of the Museum, Joseph Vella gave a brief yet very informative talk on the provenance of the instrument, how he acquired it from an auction in Floriana and how it lay dormant at his home in Rabat – Malta, for over 20 years.

The restoration and reconditioning of the Square Piano was carried out by Mr Anthony Spiteri, whose reputation as a restorer and tuner needs no defending, and the painstaking job was done with love, care, and dedication. The result is a wonderful instrument that dates back to the first decade of the nineteenth century, but which is now playable.

Francis James Camilleri, who is one of the dedicated volunteers of VIAF, agreed to play a few pieces on the instrument. It is not easy to come by repertoire that can be fully expressed on a square piano and Francis, being a classically-trained pianist is more inclined towards the canonical works that are normally interpreted on a grand piano. That said, he raided his scores and came up with a short but charming programme that brought out the quaint, clear tones of the newly-restored instrument.

Francis is a student finishing his first-year University studies in Music and History of Art. He also takes private piano tuition with Karen Briscoe. Although still very young, there is talent aplenty there, and his interpretations and dedication betray a maturity well beyond his nineteen years.

With regard to the latter, VIAF secretary and artiste Dr Maria Frendo noted that “after listening to [Beethoven] on the square piano one wouldn’t wish to hear it on any other instrument. It fitted like a glove, conjuring up images of a nineteenth-century salon in all its delicacy and finery, an intimate context that is so typical of the age.”

A very warm and well-merited applause greeted the performer at the end of the recital.

In writing this report we acknowledge our debt to the VIAF website, accessible at  www.viaf.org.mt.