Last zucchetto of His Holiness Pope Benedict XVI at the museum 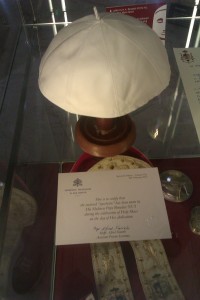 The zucchetto, or skullcap, that His Holiness Pope Benedict XVI wore on the day of his abdication, the last one of his pontificate, is now one of the valued exhibits at the new museum Il-Ħaġar|Heart of Gozo. The zucchetto, accompanied by the relative attestation, can be viewed by visitors to the museum.

The zucchetto is a gift of the Pope Emeritus to the museum and it was presented by Mgr Alfred Xuereb, former personal secretary of Pope Benedict and current first secretary to Pope Francis,  to Mgr Joseph Farrugia, coordinator of the newly inaugurated museum, partially funded by the European Regional Development Fund. Mgr Xuereb hails from Victoria, Gozo, and actively supports the museum
which came into being through the collaboration between the Fondazzjoni Belt Victoria and St George’s Basilica.

Il-Ħaġar|Heart of Gozo is now open to the public, daily, from 11.00 to 19.00hrs, except Monday. It will however be open on Easter Monday.

Mr Antoine Vassallo, chairperson of the Fondazzjoni Belt Victoria, presented Mgr Xuereb with the commemorative card issued by Maltapost on the day of the inauguration of the museum.

The commemorative postal card, which has been printed in limited edition, is available from the reception desk of the museum.