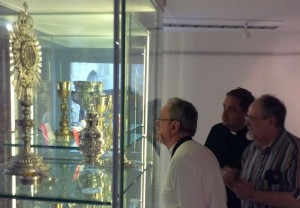 Mgr Giovanni Tonucci, the Archbishop of Loreto and Shrine Pontifical Delegate, who is in Gozo for the Għajnsielem patronal feast, has visited the Victoria museum Il-Ħaġar – Heart of Gozo. He was accompanied on his visit by Għajnsielem Archpriest Frankie Bajada.

The Museum said that Mgr Tonucci repeatedly expressed his surprise “at such a quality of exhibits and their presentation.” He took numerous photos, asking “permission” to apply certain ideas to modernise aspects of the Loreto offering.

The Archbishop noted particularly the audio-visual rooms with their great variety of clips, as well as the central spine representing the various peoples, which, along the centuries, formed our identity. He commented that “such a place should be an element in any pastoral project.”