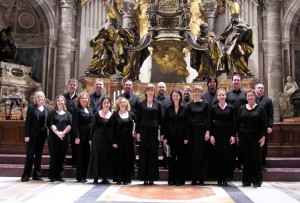 A Sacred Music Recital by the St Teresa’s Church Choir (Dublin) will be held at St George’s Basilica on Friday 4th April at 8.00pm.  Everyone is invited to attend. St Teresa’s Church, Clarendon Street, Dublin St Teresa’s Church is located in Dublin’s south inner city. Situated in this fashionable shopping area  popular with Dubliners and tourists alike, this beautiful church offers its many hundred daily  visitors a peaceful retreat from the hustle and bustle of city life. For over two hundred years St  Teresa’s Church has been home to a Discalced Carmelite community, friars and brothers of a  contemplative order that traces its roots back to the medieval hermits of Mount Carmel in Israel.  Several public masses are celebrated daily to facilitate people’s spiritual needs in the busy locality.

In 1990 the choir was founded by the present Prior, Fr Christopher Clarke and the Organist and  Director of Music, Ronan McDonagh. At that time a small group of singing students was assembled  with a view to providing a high quality choir to enhance the liturgy. In the intervening years it has  become one of the most respected choirs in the city. From the outset the choir has sought to fulfil  its liturgical function in the fullest way possible. The use of a broad range of vernacular hymns and  psalm settings encourages the active participation of the congregation, while carefully chosen  motets aid reflection and prayer. Recognising the need to preserve the rich tradition of Catholic  sacred music, the choir has built up an extensive repertoire of Gregorian chant and polyphonic  music from the Renaissance to the present day. The choir has given two lunchtime concerts at the  National Concert hall and was a prizewinner in the Choirs at Christmas competition on Lyric Fm in  1999.  This visit to Malta and Gozo is the choir’s third trip abroad, having previously performed in Madrid  and Avila in Spain and in St Peter’s Basilica in Rome.  The choir sings at the 11.00am Mass each Sunday and at Noon Mass on Feast Days.

Gráinne Gormley – Director of the Choir

Gráinne Gormley is a native of Dublin and holds degrees in music from University College, Dublin  and the University of North Carolina at Chapel Hill. She has held a variety of teaching positions,  including Visiting Lecturer in the Humanities at Deep Springs, an all-male college in California,  and Modular Teaching Fellow in the Department of Music, UCD. In 1993, Gráinne was appointed  conductor of St. Teresa’s Choir and also became the first female conductor of the University of  Dublin Choral Society, a position she held for six years. Other conducting positions held include the  UCD College Choir (1994-2001), Dublin Youth Orchestra (1993-1998) and Tallaght Choral Society  (1996-2001). She has also worked on various projects for RTE (Ireland’s national public sector  broadcaster), as music associate on radio and television broadcasts and as choral director on several  programmes for Theatre Nights and the Gay Byrne Show. She has taught courses in choral  conducting at the DIT Conservatory of Music and Drama, directed workshops for choral groups and  adjudicated at music festivals. Gráinne is married to novelist, Curtis Adler and they have two children, Hugh and Ella.

Ronan has held the position of Organist and Director of Music at St Teresa’s since 1990. His organ  studies began with Fr. Frank McNamara as a scholarship student at the Schola Cantorum at St  Finian’s College, Mullingar, and continued with Professor Gerard Gillen at Dublin’s Pro-Cathedral.  He has won major organ competitions at the Dublin Feis Ceoil and holds the Performance  Licentiate of Trinity College, London. He has obtained both an honours Bachelor of Music degree  from UCD and a Masters Degree in the Performance and Interpretation of Organ Music from NUI  Maynooth. He also teaches Liturgical Music Composition at both the NUI and Pontifical  University, Maynooth. In recent years he has become widely known as a composer of liturgical music. His compositions include instrumental music, Mass settings, unison hymns and psalms,  homophonic and polyphonic pieces for equal and mixed voices, and challenging contemporary  motets for advanced choirs. Many of his compositions have been published in Ireland by Veritas  and Carmelite Publications, while GIA (Gregorian Institute of America) have published some of his  choral works in the United States.