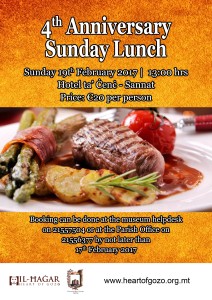 The 4th anniversary Sunday lunch marking the inauguration in 2013 of Il-Ħaġar Museum was a success. About 80 Museum supporters attended despite some difficulties connected with its promotion. In fact it was practically an event that people learned about mostly by word of mouth.

Speaking at Hotel Ta’ Ċenċ, curator Mgr Dr Joseph Farrugia, thanked the patrons for their support and also the hotel management for its part-sponsorship. The proceeds for the Museum amounted to €645.

The anniversary lunch, which usually attracts about a hundred people, was supported by 79 guests attending and by others supporting it through contributions. The last lunch in support of the Museum was held in January 2017 and had attracted over 120 supporters.

The next festive lunch in support of the basilica museum will be feld on St George’s Day, Sunday, April 23 2017, at Calypso Hotel, Marsalforn.