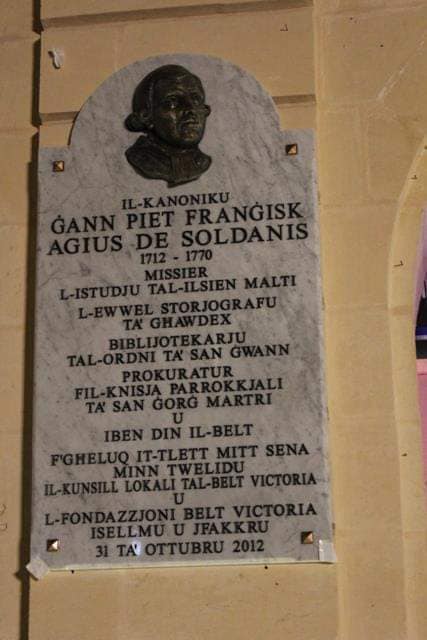 Today is the 250th anniversary to the day when the scholar, writer and patriot Gian Pietro Francesco Agius de Soldanis passed into the fulness of eternal life. Fondazzjoni Belt Victoria states that this Gozitan patriot is and shall always remain the pride of the ancient town of Victoria and a prominent benefactor of the parish of St George that he loved and served.

Born on 1 November 1712, GPF Agius de Soldanis became a priest of St George’s and later canon of the castello’s matrice. He wrote the first history of Gozo, published works in Maltese philology, produced the first Maltese grammar, organized the conventual library of the Order of St John in Valletta which became the National Library and served as a procurator at St George’s, his home parish in Gozo. He died in Valletta on 30 January 1770 and was buried in the collegiate church of St Paul.

On the initiative of Fondazzjoni Belt Victoria, then mayor Dr Samuel Azzopardi unveiled a commemorative plaque in his honour on the eve of the inauguration of Il-Ħaġar Museum, the 22nd of February 2013.